Because There Is Good News 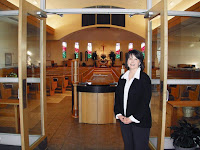 You have heard it said, “it is always darkest before the dawn,” and you have nodded your head in agreement. At least those of you who have ever camped out know this to be true, right?

These have been dark days for our Church. Scandals, parishes and schools closing, doom and gloom, etc. But it is not always so, and no single one of us can see the “big picture.”

Everything depends on the unforseeable ways of God and his secret graces, together with human liberty, comprised as it is in his eternal plan. What is certain is that the Church will emerge from this crises wonderfully purified; error will not have got the better of her.

So let me share a little good news from the local newspaper in my town. It is about the director of the RCIA program in my parish. Her name is Tanya Belanger and here is her story,

“I grew up knowing a few things: I knew that the Catholic Church was the world’s biggest cult, I knew that the Pope was the anti-Christ, and that Catholic people were non-Christian,” says Tanya Belanger.

The program is designed to teach adults interested in Catholicism about the church through weekly Monday night meetings hosted in part by laypeople who want to share their faith. The current program has about 55 people attending classes, Belanger says, explaining one of the common motivators for attendance is having a family member who’s Catholic.

RCIA programs have been a part of the Catholic Church since its formation but, as Belanger explains, it “fell out of favor” for many years until the Second Vatican Counsel brought it back to the Church around 1980.

And it’s through the program that Belanger not only became a part of the Catholic Church, but ultimately ended up in charge of it.

Like Loading...
This entry was posted in Culture, Living, Prayer and tagged Graces, In the News, Miracles, Missions. Bookmark the permalink.