For All the Saints: Louise de Marillac 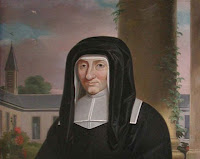 Earlier this morning, I posted a book review in which the author states that one of his problems with the Catholic Church is that it treats women like second-class citizens. Well, surprise! The LORD works in mysterious ways.

And although the word mystery is an irritant to some, including the author of that particular book, today’s feast of St. Louise de Marillac is “Exhibit A” in the refutation of that preposterous idea. I don’t think it is a coincidence that today is her feast day.

Now I will be the first to admit that I don’t know about every saint under the sun. But I don’t let that stop me from finding out more. And as it turns out, Louise is the foundress of the Sisters of Charity of St. Vincent de Paul. You may have heard of them. And get this, she did it pretty much on her own, of course, with the blessings of a few saintly priests you may have heard of, not to mention the guidance of the Holy Spirit. I wonder what Ayn Rand thought of the achievements of folks like Louise and her adopted sisters?

I’ll share with you the charming, and fascinating, story on this great woman of the Church from a write up which was published in the August 1920 edition of Catholic Missions magazine. Take a look,

Louise de Marillac, widow Le Gras, was the foundress of the religious society known as the Sisters of Charity. She was beatified last June. There are many branches of the original Sisterhood and the habits vary, but all sprang from the parent tree planted in 1633 by St. Vincent (de Paul) and Louise de Marillac. Another of this holy woman’s early spiritual directors was St. Francis de Sales, so that she had an intimate knowledge of the ways of saints.

On June 6, 1919, in the consistorial chamber of the Vatican, three decrees of beatification and canonization were read. The second of these concerned the beatification of the Venerable Louise de Marillac, in the world called the widow Le Gras, who founded the Society of the Sisters of Charity, also known and loved as the Daughters of St. Vincent de Paul.

The Sisters of Charity are especially honored in mission countries because a large part of their activities are in behalf of unfortunate pagans whom, in great numbers, they have led by kind ministration into the Church.

It was at a troublous period of French history, when civil wars and countless feuds were dividing the country that this child of destiny first saw the light. She was the daughter of Louis de Marillac, who himself was the brother of two men destined to most tragic fates in the years to come.

One, the Chancellor Michel de Marillac, was celebrated, as the author of the great compilation of laws called the “Michau Code.” The other, Marshal de Marillac, was famous in France
for taking part against Cardinal Richelieu, in favor of Marie de Medicis.

The father of Louise was also noted for high intellectual qualities as well as for nobility of character. The girl was not destined, however, to enjoy the love of her parents for many years. Her mother died when she was a small child and her father when she was about fifteen.
At twenty-two Louise was a maiden showing plainly that she possessed rare gifts of heart and mind. Her education was advanced for the Period for besides the usual studies pursued by young ladies, she had a knowledge of Latin and philosophy, and could paint with skill.

In 1613, in the church of St. Gervais, Louise became the wife of Antoine Le Gras, one of Marie de Medicis’ secretaries. A son born of this marriage later became Counsellor of the King. The married life of Louise lasted only twelve years. At the age of thirty-four she became a widow and took a vow never to marry again.

At this period she had the advantage of some very remarkable spiritual directors. First among these was Mgr. le Camus, Bishop of Belley; later she placed herself under St. Francis de Sales. Then she came into communication with the holy St. Vincent de Paul, with the result that she decided to devote the remainder of her life entirely to works of charity and piety.

The decree concerning the cause of beatification thus speaks of this event:

From the day when the venerable servant of God, Louise de Marillac, widow Le Gras. encountered this man of preeminent piety, known as Vincent de Paul, and chose him for the director and judge of her conscience, ther.e was established between the two souls a union that time could not dissolve. During the thirtyeight last years of her life the Venerable Louise remained faithfully attached to Vincent de Paul and allowed herself to be guided and governed by him whom the designs of divine Wisdom had sent to be her master and guide.

It is impossible to cite here the numberless good works performed by Louise de Marillac, suffice it to speak only of the foundation of the Society of the Sisters of Charity. St. Vincent had instituted in a number of parishes associations of pious women whose duty it was to visit and care for the sick. Louise de Marillac was given the supervision of these bands, and much charity was dispensed, but as they were composed of ladies living in the world they were not as fruitful as St. Vincent and his auxiliary desired.

It was therefore decided to recruit a number of young girls who would consecrate themselves exclusively to the service of the poor out of love for their Divine Master. The first to offer herself was a little shepherdess; others soon followed, and in November, 1633, the foundress had a little community of four beside herself to whom she gave a rule of life. Two years later she herself took a solemn vow to consecrate herself to the service of the poor. Thus was brought into existence that wonderful organization known throughout the world as the Sisters of Charity.

At the beginning of the present century the various communities counted 2,658 nuns, who cared for 37,714 children in schools and orphanages and who had charge in hospitals of more than a million sick and infirm. It is the ministration of the Sisters in the missions that concerns us most directly, and while these nuns always performed a valuable work in the stations to which they were appointed, since the war, on account of the increase in poverty and human misery, their hospitals, schools and orphanages are more crowded than ever.

Rescue work among the abandoned babies of China is an important branch of their propaganda. It has been stated that at the beginning of the century the Sisters of this association numbered 2,658. But since then it has increased its members by leaps and bounds. In 1919 there were in the missions alone 1,435 Sisters, of whom 939 were Europeans and 496 native women. In the districts confided to the Lazarists, in which these Sisters are most numerous. 3,411,427 persons were treated in hospitals, 6,567 orphans were sheltered, 1,081 aged men and women
given a home, and 400 lepers’ received physical and spiritual care.

These figures relate only to the missions. What a splendid showing must be made every year in the great cities of the world, where the daughters of St. Vincent de Paul are engaged in every variety of charitable ministration!

It was in February, 1660, that Louise de Marillac was seized with the illness that was to prove fatal. The malady was a violent fever increasing so rapidly that within a few days, her condition was considered serious and she was given the Last Sacraments. After this she revived wonderfully and lived a month in comparative ease. But in March the fever again attacked her and on the fifteenth of the month she was prepared for death, and immediately rendered her soul to her Maker.

Her venerable director, St. Vincent de Paul was not with the foundress of his Order during her last moments on earth, as he himself, then in his eighty-fifth year, was lying on a bed of pain. In fact, he lived only six months longer than Louise de Marillac.

In June, 1895, exactly two hundred and thirty-five years after the death of this holy religious, Pope Leo XIII signed the introduction of The Cause of Beatification and canonization of the venerable servant of God, Louise de Marillac, widow Le Gras. The solemn ceremony of beatification took place in Rome, Sunday, May g, 1920.

Such events are always most bsautiful and most impressive. On this occasion St. Peter’s was splendidly decorated. Over the altar hung a portrait of the Venerable Louise heavily veiled. Several – cardinals, two hundred bishops, the dignitaries of the pontifical court, the Superior General of the Lazarists, and the Mother General of the Sisters of Charity, assisted at the services.

After the mass the Secretary of the Congregation of Rites read the brief of beatification, and then the veil was withdrawn and the portrait of Blessed Louise appeared in all its glory.
Immediately the bells of St. Peter’s burst into a clarion of joyful sound announcing to Rome that another great one of the Faith had received the honors of the Church.

Like Loading...
This entry was posted in Culture, Living, Prayer, Working and tagged Books, Saints. Bookmark the permalink.