Because Mary Said “May It Be Done to Me” 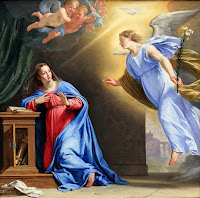 Today is the Solemnity of the Annunciation of Our Lord. Before I was a Catholic, I wouldn’t have even known what that all means. Just another one of those big ol’ words linked to Jesus’s mom that everyone knew Catholics worshiped.

Mary, schmerry, I thought, God can do anything. If Mary would have said no, big damn deal.

Sort of like asking a girl to dance at a party and you get rejected.”Sorry God, looks like she said No. Let me buy you a beer to help you put the flames out.” Next candidate please. There’s a lot of fish in the sea.

But actually my thinking on the matter was even more asinine than that. It was more along the lines of,

“Of course Mary said Yes. How could she not?” Free will? No way man, it is all a part of God’s preordained plan.”

I carried that same thinking all the way to the Cross too, “Of course Jesus would die for us on the cross. He is God and knew that ‘this too shall pass.’ No biggie. He knew he would come back to life.”

But that too is just ridiculous and naive thinking. Note that it denies Our Lord’s full humanity. And there I was, thinking I was a good Christian and I was really just another hapless heretic.

But that story is for another day. Let’s stay focused on the Mother of God (an honorific title that again never crossed my mind even as I “knew” Jesus is God). As I tend to do, I check in at the Liturgy of the Hours over at Universalis. Clicking on the About Today link, I found what may be the best 800 word essay about the Annunciation that I have ever read. Who wrote it pray tell? I don’t know. But I’m grateful to God that they did.

What if she had said No?

The question may strike you as irreverent. How dare I suggest that the Blessed Virgin Mary, Queen of Heaven, Co-Redemptrix of mankind, could have left us in the lurch like that?

But what if she had?

Could she have said No? You might say that of course she couldn’t, she was far too holy — but you would be guilty of demeaning her and dangerous sentimentality. It is demeaning because it turns Our Lady from a free human being into a sanctified automaton. The whole glory of the Annunciation is that Mary, the second Eve, could have said No to God but she said Yes instead. That is what we celebrate, that is what we praise her for; and rightly so.

This sentimental view is dangerous too. If we believe that the most important decision in the history of the world was in fact inevitable, that it couldn’t have been otherwise, then that means it was effortless. Now we have a marvellous excuse for laziness. Next time we’re faced with a tough moral decision, we needn’t worry about doing what is right. Just drift, and God will make sure that whatever choice we make is the right one. If God really wants us to do something he’ll sweep us off his feet the way he did Mary, and if he chooses not to, it’s hardly our fault, is it?

So Mary could have said No to Gabriel. What if she had? He couldn’t just go and ask someone else, like some sort of charity collector. With all the genealogies and prophecies in the Bible, there was only one candidate. It’s an alarming thought. Ultimately, of course, God would have done something: the history of salvation is the history of him never abandoning his people however pig-headed they were. But God has chosen to work through human history. If the first attempt at redemption took four thousand years to prepare, from the Fall to the Annunciation, how many tens of thousands of years would the next attempt have taken?

Even if the world sometimes makes us feel like cogs in a machine, each of us is unique and each of us is here for a purpose: just because it isn’t as spectacular a purpose as Mary’s, it doesn’t mean that it doesn’t exist. When we fail to seek our vocation, or put off fulfilling some part of it, we try to justify ourselves by saying that someone else will do it better, that God will provide, that it doesn’t really matter. But we are lying. However small a part I have to play, the story of the Annunciation tells me it is my part and no-one else can do it.

Faced with the enormity of her choice, how was Mary able to decide? If she said No, unredeemed generations would toil on under the burden of sin. If she said Yes, she herself would suffer, and so would her Son; but both would be glorified. Millions of people not yet born would have Heaven open to them; but millions of others would suffer oppression and death in her son’s name. The stakes were almost infinite.

You might say that Mary didn’t worry about all this, just obeyed God; but I don’t believe it. What God wanted was not Mary’s unthinking obedience but her full and informed consent as the representative of the entire human race. The two greatest miracles of the Annunciation are these: that God gave Mary the wisdom to know the consequences of her decision, and that he gave her the grace not to be overwhelmed by that knowledge.
When we come to an important decision in our lives, we can easily find our minds clouded by the possible consequences, or, even more, by partial knowledge of them. How can we ever move, when there is so much good and evil whichever way we go? The Annunciation gives us the answer. God’s grace will give us the strength to move, even if the fate of the whole world is hanging in the balance. After all, God does not demand that our decisions should be the correct ones (assuming that there even is such a thing), only that they should be rightly made.

There is one more truth that the Annunciation teaches us, and it is so appalling that I can think of nothing uplifting to say about it that will take the sting away: perhaps it is best forgotten, because it tells us more about God than we are able to understand. The Almighty Father creates heaven and earth, the sun and all the stars; but when he really wants something done, he comes, the Omnipotent and Omniscient, to one of his poor, weak creatures — and he asks.

And, day by day, he keeps on asking us

Ask a lawyer the difference the word “may” makes versus the word “shall” in a contract and the free will answer of Mary will become even more clear to you. And yes, life does begin at conception, which is why we celebrate that fact on this day as well. The conception of Our Lord.

For more on the Annunciation, check out the linkfest brought to us by Elizabeth Scalia. You’ll be glad you did.

Update: What else changed my mind about St. Mary? Come and see.