For Stuff My Abba Macarius Says 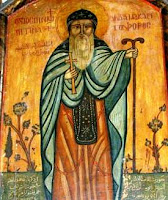 I’ve mentioned in the past that my patron is St. Macarius the Great. He was a Desert Father who lived between the years 300 – 390 AD. He went into the desert when he was thirty years old, became a priest when he was 40 years old, was accused of adultery, and when he was proved innocent, he fled and headed to a place in the Egyptian desert called Scetis.

I probably went right by Scetis once or twice and never even knew it when I took a trip up to the battlefield at El Alamein when I was stationed in Cairo.

I also made a trip up to Alexandria too, and may have passed it by again in my ignorance. I was young and more interested in the human history of the battlefields in North Africa at the time. If I only knew then what I know now.

How did I choose Abba Macarius’s name for my confirmation name? I’ve written about that before, but I left out one little thing. It’s silly actually because it makes no sense at all. I confess that selfishness is one of the reasons. I figured that when I needed a little help from my patron, if I chose one of the well known saints, the line for my prayers to wait in would be long and winding. My solution? Choose a saint no one has heard of and the prayer line will be short! See? I’m always thinking.

A more serious reason why I chose Abba Macarius was because of the homilies attributed to him. I found out he wrote twenty-two homilies, but it turns out it’s more like fifty. Did he really write them? Or did someone else write them and use his name (much as the writer of Ecclesiastes leads us to believe he was King Solomon)? I don’t know, and I really don’t care. But having them available accomplished several things for me. First, they give a viewpoint of early Christianity that is very Catholic. Secondly, they help me by giving me access to my patrons’ wise council whenever I need it (which is often!).

The saints point us to Christ and His ways. These homilies do just that. They are powerful and I’d like to share a couple of them with you,

Homily 7: How the soul ought to demean herself in
holiness and purity, towards her Bridegroom Jesus Christ.

If a glorious prince should take a liking to a poor woman that has nothing, and have her brought home to him for his spouse, she ought ever after to show all good will to this husband, and retain a constant love for him. But if she transgresses the bounds of decency and duty, then she is turned out of doors with disgrace and reproach, and is full of sorrow; reflecting from how great wealth she is fallen, and what glory she has lost. Thus also the soul, which Christ, the heavenly Bridegroom, shall espouse to himself, ought to please Christ, her lover; carrying herself in the house of this heavenly Spouse with a fair deportment, and a grateful sense of the grace bestowed upon her. Lo! such a soul is actually invested with the full command of all her Lord’s goods, and her body becomes the glorious tabernacle of his Godhead.

But if she does not the things that are pleasing to him, and is not perfectly observant of his will, then with reproach and disgrace is she disrobed of all her honor, as no way proper for the communion of the heavenly King. And after that, there commences an universal grief and lamentation over that soul among all the saints and intellectual spirits: angels, powers, apostles, prophets,and martyrs, mourn for her. For as “there is joy in heaven,” as the Lord has said, “over one sinner that repenteth,” so is there great grief and mourning in heaven over one soul that falls from eternal life.

We must therefore strive, and with the utmost prudence take care to “work out our salvation with fear and trembling.” Whosoever therefore you are, that have been made partakers of the Spirit of Christ, look upon yourselves in no case whatever, whether small, or great, to be above advice; neither do any despite to the Spirit of grace, that you may be never excluded from the life which you have been made to partake of.

But can a man fall that has the gift of grace? Answer: If he grow careless, he certainly falls. For his enemies are never idle, or backward in the war. How ought you then never to desist from seeking after God? For the damage which you sustain by your neglect is exceedingly great, though you may seem to be even established in the mystery of grace.

Are the perfect liable to affliction or war, or are they entirely free from care? Answer: An enemy never respites any from the war. And Satan is perfectly void of mercy: wherefore neither is he backward to set upon any man whatever, though he does not attack all in the same measure and degree.

But there is need of much pains and labor, that a man may seek and lay the foundations, till such a time as the fire shall come into the hearts of men, and purge away the thorns. And thus do they begin to be sanctified, giving glory to the Father, and to the Son, and to the Holy Ghost, for ever. Amen. 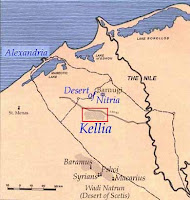 Homily 8: That spiritual men are liable to temptations and fictions.

As the experienced husbandmen, in a year of plenty, expect a time of dearth; and on the other hand, when dearth and difficulties overtake them, they are not dejected; as knowing there will come a change. So in the spiritual state, when the soul falls into divers temptations, it is not surprised as at a strange or unusual thing, neither does it despond, because it knows that they come by permission, that it may be tried and disciplined by the evil that befalls it. Neither again, when it abounds in wealth and ease, is it free from apprehension, but expects a change.

For when a man is rich in grace, there is yet a remnant of corruption with him: he has one however that takes his part, and that comes to his assistance. Whenever therefore any one is in afflictions, and the storm of corrupt affections thickens upon him, yet ought he not to quit his hope. For then sin gains ground. But when a man retains his hope in God, sin crumbles as it were, arid, and dries away.

As a well that runs, and has all about it nothing but moist grounds, when the heat comes on, both itself and its adjacent bogs are dried up; thus it is with the servants of God, in whom grace abounds; that dries up the concupiscence, not only that which is from the wicked one, but that also which is natural; because (of) that, now the men of God are greater than the first Adam.

Christians therefore belong to another world, are the sons of the heavenly Adam, a new generation, the children of the Holy Spirit, the bright and glorious brethren of Christ, perfectly like their Father, the spiritual and glorified Adam, of that very city, of the same kind, and of the self-same power. He himself says, “Ye are not of this world, even as I am not of this world.”

Yet a fear they still have upon them, not indeed that of novices, that live in a dread of wicked spirits; but a fear and concern how they may best employ the spiritual gifts they are entrusted with. And such a one as this looks upon himself to be despicable beyond all sinners. This reflection is as deeply rooted in him, as if it were his very nature. The more he advances in the knowledge of God, so much the less is he in his own eyes. And though he learns never so much; he is still as one that knows nothing. But these things are wrought in the soul by the ministration of grace.

The case is not unlike that of an infant in the arms of a young man; the bearer carries it about whithersoever he pleases: so does grace also carry the mind about, and bear it upwards into the very heavens, to the perfect world, and eternal rest.

****
As the Holy Spirit says in the Epistle to the Hebrews,

Continue to have confidence, since the reward is so great. You will need endurance to do God’s will and gain what he has promised.—Hebrews 10:35-36

Abba Macarius, pray for us.