Because We’re a Pilgrim People 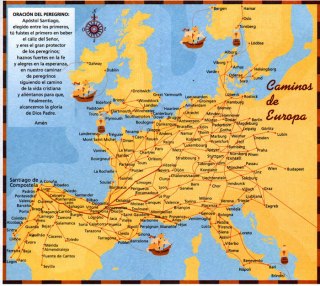 My father was a wandering Aramean.

Today is the Feast of St. James the Greater, brother of St. John the Evangelist. He is one of the sons of Zebedee, the “sons of thunder,” as Our Lord called them. James was the first of the Apostles to be martyred, which is interesting when you consider that Mary Salome, the mother of these two, and with them in tow, had the temerity to ask Jesus the following request,

“Command that these two sons of mine sit, one at your right and the other at your left, in your kingdom.”

Jesus said in reply, “You do not know what you are asking.

Then he must have turned to these two and asked,

Can you drink the cup that I am going to drink?”

You’ve got to hand it to them. I mean they were nothing if not confident.

He replied, “My cup you will indeed drink, but to sit at my right and at my left, (this) is not mine to give but is for those for whom it has been prepared by my Father.”

Of course, after this episode, the other ten disciples got pretty fired up at these two, and Jesus again uses it as a teachable moment and says,

“You know that the rulers of the Gentiles lord it over them, and the great ones make their authority over them felt. But it shall not be so among you. Rather, whoever wishes to be great among you shall be your servant; whoever wishes to be first among you shall be your slave. Just so, the Son of Man did not come to be served but to serve and to give his life as a ransom for many.”

Christ certainly has a way of melting animosity while bringing the focus back to seeing things as He sees and pointing us down the paradoxical path of the Way.

Speaking of St. James, feast days, paradoxes and the Way, I wanted to share with you all a couple of blog posts that you may find of interest. The first is from Teresa Doyle-Nelson’s blog Bible Saints and includes some really neat background information about James the Greater. The second is a post written by Fr. Steve Grunow of Word on Fire about the pilgrimage along “the Way of St. James,” also known as Santiago de Compostela.

My wife would be thrilled to know that I would love to fly to Provence (remember that dream?) and hike along the pilgrims path all the way to the cathedral in Santiago in Northern Spain. Wait a second…hike the route?! Ok, that may be a little over the top. Maybe a Eurail Pass would do the trick.

By the way (pun intended), I found that way cool map at the website of the Confraternity of St. James. Go check it out too!

UPDATE: Which James is which again?